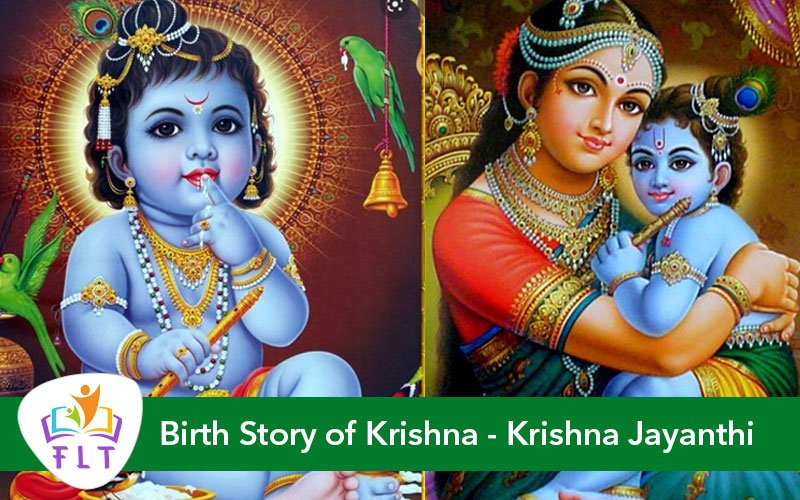 One day, while Kansa was taking Devaki and Vasudeva on the chariot to the palace, a divine voice said, “Kansa will be killed by Devaki’s eighth son.”  Kansa became very angry and he tried to kill Devaki.  But Vasudeva pleaded with him and promised to give Devaki’s children soon after their birth.  Then, Kansa imprisoned Devaki and Vasudeva.  He would kill the child immediately whenever the child was born and they lost seven of their children.

Suddenly, the guards fell asleep and the doors of the jail opened.  On his way to Gokul, he had to cross the River Yamuna. Vasudeva held his baby high over his head.  There was heavy rain and water made way for Vasudeva to cross it easily and miraculously a five mouthed snake followed him from behind and provided shelter over the baby.  This helped him to reach Gokul.

Vasudeva placed the child next to Yashoda and brought the baby girl with him to Mathura.  The sleeping guards woke up on hearing the baby cry.  They informed Kansa, who then tried to kill the baby.  However, the baby turned into a Goddess and disappeared.  In Gokul, Nanda and Yashoda brought up Krishna with love.

Soon Kansa heard about Krishna’s bravery and planned to kill him.  He invited Krishna to Mathura for a wrestling match.  He sent Chanura against Krishna to squeeze him but Krishna threw him on the ground.

Then, Krishna took his sword and killed Kansa.  He then freed his parents from prison and took their blessings.

The birth of Lord Krishna is celebrated as Krishna Jayanthi or Janmashtami all over India with great devotion.