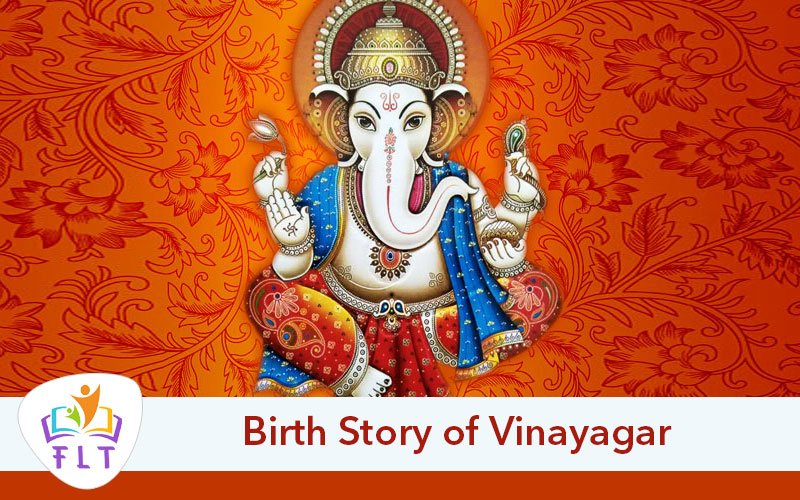 Shiva and Shakti are husband and wife.  Shiva does not want to be a father.  He did not like to deal with worldly life as he is a God.  But Shakti wants to be a mother and to engage with worldly life.

But Shakti wanted a child.  She decided to create on her own.  So, She anointed herself with turmeric and oil.  When the mixture had soaked her sweat and dried on her skin, she scraped it off.  She created a child from the rubbings and she named her son Vinayaka.

She ordered Vinayaka to guard the gate of her cave and not let anyone in.  Vinayaka had never seen Shiva before.  He stopped everyone from entering the cave including Shiva.  This infuriated Shiva so much.  So Shiva raised his trident and destroyed Vinayaka’s head.

When Shakti learnt this, she was inconsolable in her grief.  She demanded that she wanted her son back.  To pacify her, Shiva placed the head of an elephant on Vinayaka’s headless body and declared him to be Ganesha or Ganapathi.  To Shakti’s delight, this is how Shiva became the father of Ganesha without realising.

Shiva, after placing head , declared that Ganesha should be worshipped first before we worship any Hindu God.  He is the first God to be worshipped.  This is the reason we pray to him before starting any work.  Ganesha is also said to be the Remover of all obstacles.

The birth of Ganesh is celebrated as Vinayagar Chathurthi all over the world.  People celebrate this festival with lots of fun and devotion.  The houses are decorated with mango leaves and flowers.  Then, they prepare kozhukattai and offer it to the clay idols of Ganesha in their house.  The celebration is done in a grand manner at temples by offering very big kozhukattai and then distributing it among the people.  On the third day, they finally immerse the clay idol in the river or sea praying to Lord Ganesha to be back in the next Vinayagar Chathurthi.

For Essay on Vinayagar Chathurthi, please click the link below: