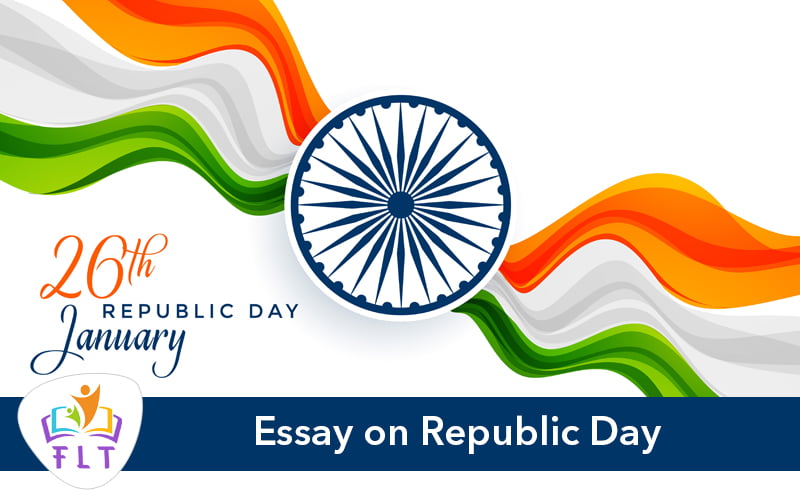 Every year 26th January is celebrated as Republic Day.  India got its freedom on Aug 15, 1947, and became a republic on Jan 26, 1950.  It is indeed a great day in the history of India.  The new constitution of free India came into effect from this day.  There is a celebration with a lot of pomp and show.  The celebrations are done in every state capital and the real show is held in New Delhi, the capital of India.  There are Flag hoisting ceremonies and parades by armed forces and school children in different parts of the country.  The most important of these parades is at Rajpath in New Delhi which lasts for 3days and it is the main highlight of celebrations.  This showcases our rich cultural heritage.

This day is celebrated at the lawns of India Gate in Delhi.  Many people from far and near gather to witness this scene.  They take their seats early in the morning. In the morning, there is a flag hoisting ceremony.   Then, they salute the flag after which there is a speech by the Chief Guest. Every year, one foreign dignitary is invited as Chief guest on this day. First, the Prime Minister lays a wreath at Amar Jawan Jyothi at India Gate and pays homage to the Martyrs who lost their lives for the nation. The President reaches the saluting base in a coach, he stands on a platform and takes the salute from the Army, Navy, and Indian Air Force Personnel. He is received by the Prime Minister and other senior Cabinet Ministers.  We remember the people who lost their lives and their sacrifices to give us freedom. We should never forget what they did for us.

Then the procession starts.  There is a display of tanks, big guns, and weapons of the Armed forces.  Then, the dancing troops from different states take part in the procession.  In fact, it is the most colorful and beautiful part of the procession. They portray the customs and traditions of the life of the people of various states.  They also show the progress made by the different states of India in various different fields.  Likewise, there are performances of various school boys and girls showing their patriotism.  The last show is a Colorful fly by the Indian Air Force Aeroplanes leaving behind a trail of saffron, white and green colors. Also, Balloons of these three colors are floated in the sky.

All the national buildings like Rashtrapathi Bhawan, Central Secretariat are fully lit up and this presents a beautiful sight at night.  Then, the National Anthem is sung, while everybody stands to attention as a mark of respect.  A Beating Retreat Ceremony signifies the end of the parade.  To conclude, Republic Day is a National holiday in India.